Skip to content
You are here: Home » Area News » Europe » «Evolution of Table Hockey in Russia»

«Evolution of Table Hockey in Russia»

Development of Table Hockey in Russia, its History, Notable Players and their Achievements

Due to the opening of 2019-2020 table hockey season in Russia which starts with the XVIII Open Table Hockey Russian Championship in Kazan today (13.10/Oct. 13), in this article I present several curious facts about table hockey life and its glories in this country

The development of table hockey in Russia is related to the Soviet bandy team’s success and their first victory of the World Championship in 1957. One result of the Soviet’s success in bandy was that more people across the Soviet Union were now aware of hockey. Bandy, ice hockey, and table hockey became well known.

Yury Gagarin, the world’s first cosmonaut, famous in the old Soviet Union and around the world, played table hockey in 1961. This brought fame to the sport of table hockey. In addition, after the Summit Series (USSR vs Canada) in 1972 the sales of the Stiga Table hockey game in USSR reached their record.

Naturally, the game gained more popularity in Russia, when the first national tournaments appeared in Moscow and St. Petersburg.

«St. Petersburg Table Hockey Federation» and  «North-Western TH Federation» were founded in 2000 to support the growth of this sport in Russia. One of the first Stiga models in USSR

Actually, in 2001 the complete national table hockey team of 8 male, two female and two junior players took part in the world Championship in Czech Republic for the first time. This historical event increased the amount of sportive interest all over the country. Besides, the Russian table hockey association was founded in the same year.

Nowadays this sport is widely popular in Russia. Annual competitions are held throughout the country. The most famous of them are Russian Open, Moscow Cup, Russian Cup and National championship.

By the way, the cities with a huge interest for table hockey are St. Petersburg, Moscow, Kursk, Nizhniy Novgorod, Ufa, Krasnodar, Volgograd and Rostov-upon-Don. Each city can tell you much more about the table hockey history and notable players. The Soviet cartoon “Shaybu! Shaybu!” on which the figures of many table hockey models were based

The national team has participated in the World and European championships since 2001.

On June 2-3, 2001, the national team took part in the 7th World Stiga Championship in Plzen, Czech Republic for the first time.

Then, in 2009, Christina Kozatskaya became the first Russian WTHA European champion in the women’s category. The Russian national team won the first place during the World Championships in Hungary.

Moreover, in 2011, Oleg Dmitrichenko became the first Russian ITHF world champion in the general category. During the World Championship in Turku (Finland), the Russian team won 7 gold, 2 silver and 3 bronze medals. This was an absolute record of world championships. 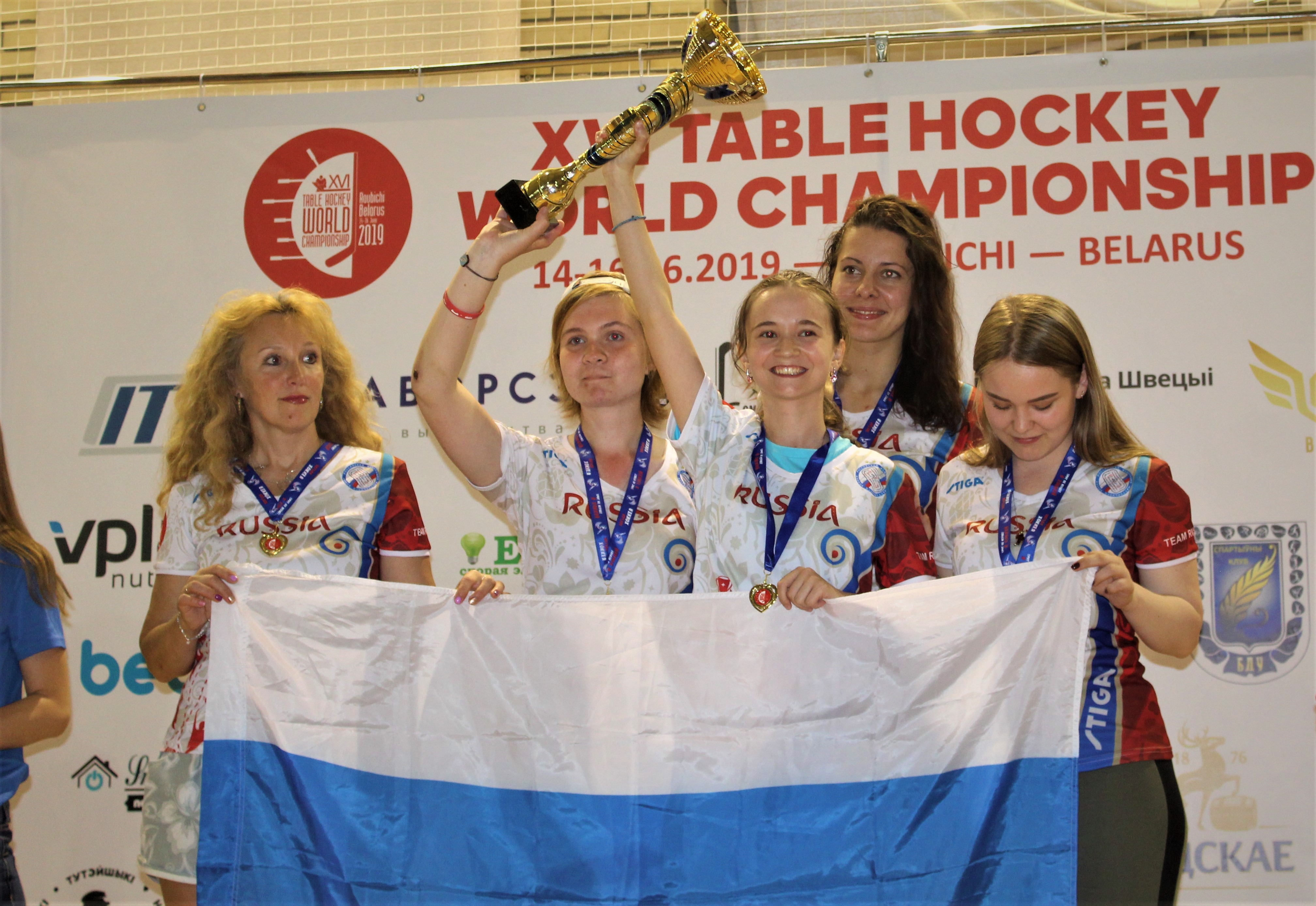 The total amount of awards Russian team has won between the years of 2003 and 2018 is 84 medals (according to wikipedia.org).

founded in 2002 as a memorial resource

Mandatory requirement for inclusion: great work in the glory of table hockey or achievements and the completion of an active or successful career in this sport.

The Russian Table Hockey inventor, who designed a table hockey model, which was later produced and sold in the USSR. Morozov developed the popularity of this sport in St. Petersburg and later in Russia, supported table hockey units and sections at schools and universities.

The second inventor of Russian table hockey. Furthermore, he constructed a model of most USSR table hockey products.

Soviet physiologist ( 1896 – 1966 ), the developer of “Movements Hierarchy Theory”, where manual dexterity and logical thinking make up the highest level. This theory was the main reason of adding the table hockey to the SOI (Special Olympics International)

Cartoon maker, producer, screenwriter and an artist. Besides, he was a creator of the cartoon “Shaybu! Shaybu!”. What’s more , the figures of majority Soviet table hockey models were made based on it.

Fiction writer (1934 – 2003), the author of the very first artistic work about table hockey in USSR, the story “Hockey of Tolya Guseev”.

The first USSR citizen who took part in the first World Championship in Sweden. Today he is a famous sports journalist.

Publicist and the author of the very first sports articles about table hockey and about St. Petersburg Table hockey federation in USSR.

The winner of the first All-Russian Championship. Multiple golden medalist of Regional and Interregional Tournaments.

Hockey is extremely popular in Russia. Though, table hockey is only gaining popularity among people, ice hockey is widely played and loved in our country.

Here are some related items you can buy in our WTHA shop:

Click, Mariia Maksimova, to read the personal bio of our communications team member and the author of this article.

Click, All posts by Mariia Maksimova, to read all the articles she has authored.

About the Author: Mariia Maksimova