The Stanley Cup and the T.J. Rugg Trophy are on collision course.

While the NHL icemen will be drinking champagne for winning major league hockey’s coveted trophy, a similar event will be taking place almost simultaneously in Manhattan.

Table hockey’s answer to Lord Stanley’s coveted mug — The T.J. Rugg Trophy — will be awarded on Saturday, June 8, 2019, as part of the 50th anniversary of its’ debut.

Along with the top ranked players, SOHO Table Hockey is expecting a vast variety of NHL and Media celebrities to be in attendance.

A cash prize of $1,500 will go to the winning team, with the runner-up taking home an original painting by famed sports artist Danny Rios Farrell.

And as part of the celebration, the Stanley Cup of Table Hockey — The T.J. Rugg Trophy — will be dusted off and presented to the champion two-person team by the legendary “Hockey Maven,” Stan Fischler, who hosted the original 1969 title match on the Upper West Side.

The contemporary championship game will feature the best players from the United States and Canada.

Tourney organizer, John Fayolle of Manhattan, is the Founder and CEO of SOHO Table Hockey, which is the company hosting this event.

Now in its sixth year, the boutique company makes handcrafted, state-of-the-art table hockey games that are featured in tournaments throughout North America, including: New York, Montreal, Toronto, Chicago, and Detroit.

The Original North American Table hockey games were not designed to withstand the test of time, or the rigors of high-level, competitive tournament play.

In fact, they were typically gifts found under the Christmas tree from the 1930s to the late 1980s, with the most widely sold game in North America from 1963-1988 being the Coleco/Eagle “S” Slot pattern game.

It was marketed first as The Eagle and then as the Coleco Stanley Cup Hockey Game.

SoHo Table Hockey has redesigned the Classic “S” Slot game with state-of-the-art components complemented by exotic woods from around the world.

Their proprietary playing surface plays like real ice and will never sag. The game surface is 5/8 inch thick, which is five times the size of the standard 1/8 inch thick masonite used in the old Coleco and Munro games.

The control rods are made of unbendable, high-tensile strength music wire steel. This means no one ever has to worry about bent rods ever again, as they will always be perfectly cylindrical and can withstand aggressive or tournament-level play.

For more information about registration and the company itself, please visit: sohotablehockey.com 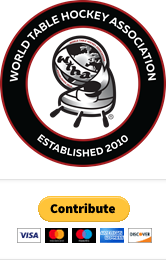