Skip to content
You are here: Home » Area News » Canada » You’re Invited to a Table Hockey Tournament in Edmonton!

You’re Invited to a Table Hockey Tournament in Edmonton!

The games will be set up on Centre Stage (in front of The Bay) on the east side of the mall – passersby will be able to see the games from both the upper and lower levels.

The tournament begins at 9:30 am. Two round robins will be played for a total of around 30 pre-playoff games. Playoffs are all best-of-sevens in all Pools. This is a Player’s Choice tournament.

Edmonton Table Hockey League (ETHL) tournament schedules are set up so that there are minimum figure changes between games (one overall change per round robin). Scores are kept by each player on his scoresheet, so you’ll get the maximum amount of games in a minimum of time! 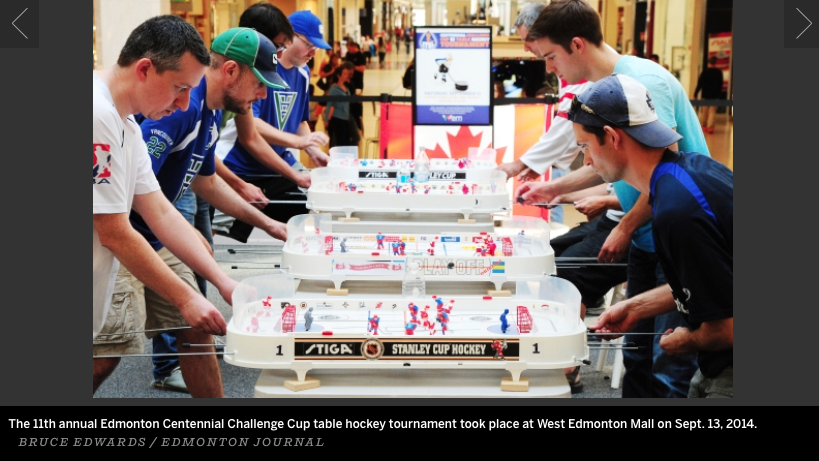 There will be trophies for the top 3 finishers in each group and there will be prizes for everyone at the end of the day. In past years, these prizes have included autographed sticks from the NHL’s Edmonton Oilers, NHL T-shirts, NHL DVDs and various other NHL memorabilia.

The deadline for registrations is Thursday, September 15th. Entry fees are $40 CDN ($35 for CTHA and USTHA members) and $30 for first time players. Payment can be sent by Paypal to ReggieJ44@hotmail.com or by cheque or money order in CDN funds, to:

Tournament rules will adhere to ITHF guidelines, and players will be welcome to use NHL or International Stiga player figures. All games are cleaned with diluted Original Windex, have Suplaks, Lyle Knittig net deflectors, pledged rods, oiled slots and ‘Tack it Over’ on the rod pegs.

If you come with your spouse and children, there are enough activities in the Mall to keep them busy for the whole day. Attractions include a Sea Lion Park and an amusement park amongst others.