Custom Coleco World Champion Carlo Bossio and 4th ranked Andre Pigeon dropped in for N.Y.T.H.L. League Date 4.  As expected they met in the Final which Bossio took 3 games to 1.  Bossio ripped his way through the round robin without a loss as he only suffered 1 tie to The Vinner.

Andre Pigeon didn’t have as easy of a time thanks in part to Johnny “NY Lightening” Fayolle, who is rebounding from various injuries and is rounding into form as he managed to defeat Pigeon 4-3 in round robin play.  Andre’s other loss was to King Carlo in what would be a preview of the Championship.  The Vinner also managed to tie Andre during round robin play as well.  When all was said and done Bossio was seeded first, followed by a very strong 2nd place finish by “The Legend” Lou Marinoff, followed by Pigeon then The Vinner.  John Fayolle rounded out the top 5. 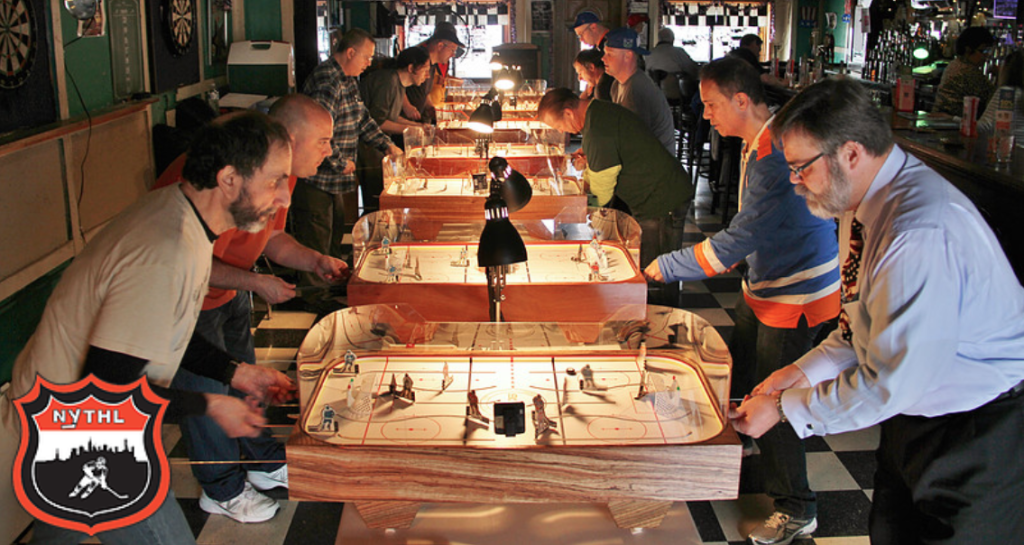 Bossio and Marinoff received first round byes.  Andre, The Vinner, and John Fayolle all managed to sweep their way into the Quarterfinals.  Greg Scoma 3-2 games over Bob D’Addario, J.P. 3-1 games over Len Mecca, and Anthony 3-2 ames over a much improved Larry Durham rounded out the preliminary round.

In the Quarters Bossio and Marinoff swept their series.  Andre took down Scoma 3 games to 1 and The Vinner managed to get by John Fayolle 3 games to 2.  Fayolle came back from 2 games to 0 with decisive victories in games 3 and 4 to force a 5th game which The Vinner won 6-1.

The Semi-Finals were set and it was all chalk, as seeds 1-4 all advanced.  Carlo then proceeded to take out The Vinner in a 3 game sweep outscoring him 27-6.  Andre Swept past Lou Marinoff, but the series was closer than it seemed as Lou lost games 1 and 2 by the same score of 6-5.  The game 2 defeat came in overtime.  Andre then finished Marinoff off with a 11-3 victory to set up the all Canadian Final.

Marinoff lost game 1 of the best of 3 third place consolation series to the Vinner, but then rebounded to take the next 2 games winning the series 2 games to 1.

Those who stuck around to watch two of the premier players of the N.T.H.L. were not disappointed.  Andre handed Carlo his only loss of the day in game 1 by a score of 5-4.  As has been the case so many times, Bossio came from behind to win the next 3 games by scores of 7-5, 6-1, 9-4 to win League Date 4.

Aside from being great players Bossio and Pigeon were gracious visitors and honorable sportsman.  They had a great time and helped give advice to many of the players from the New York League.  Although many of the great players in table hockey as well as Ice Hockey are from Canada, New York has represented itself well over the past year.  The N.Y.T.H.L. now has 3 players in the N.T.H.L. top 15.  Lou Marinoff #8, The Vinner #14 and John Fayolle #15.  Even in its infancy The New York League has begun to make its mark.  On this day however Carlo Bossio and Andre Pigeon proved that more work needs to be done by the New Yorkers, but overall they are on the right track.